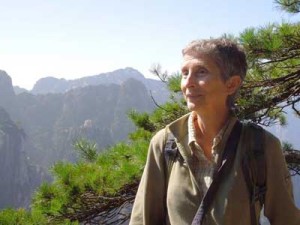 Ellie has been studying and teaching Hua Yue Tai Chi (known also by the lineage name Liuhebafa) since the early 1970s, as learned from Master John Chung Li.  Since 2011, she has also offered instruction in Sun Style Tai Chi.  She is a founding member of Tai Chi Vermont, and one of several Authorized Trainers, preparing volunteer instructors to lead Fall Prevention Tai Chi classes primarily for older Vermonters, throughout the State. She has brought Tai Chi for Johnson State College, Goddard College and UVM Continuing Education Program; she has organized classes in Hardwick, Greensboro and Montpelier. She has also offered a number of Tai Chi presentations over the years, most recently for Norwich University and Global Campuses.  Since 1977 she has also been engaged in studying Chinese language and Chinese calligraphy as a way of understanding ancient Buddhist and Daoist texts.