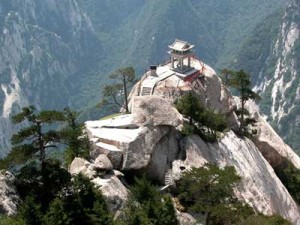 The originator of Liuhebafa (later called Hua Yue Tai Chi) was the Taoist philosopher Chen Xi Yi, who lived from 871-989 AD (well over 100 years if legend can be believed.)  He sought solitude on Hua Shan (Flower Mountain, one of five sacred peaks in a mountain range to the east of Xian) and there he developed the theory and practice of liuhebafa (literally the six harmonizations and eight methods.)  The movement sequence incorporates elements of pre-existing martial arts forms, most notably bagua and xingyi.  At some point in the development of the lineage, another important treatise came into being, known as the “Five Word Song” or “Five Character Secrets”.  This text is a series of pithy statements that offer practical and metaphysical guidance for dedicated students.  Features that differentiate this style of Tai Chi from others include the interplay of sinking and rising energy, the emphasis on circular movement, and the foundation exercises: rowing, walking and standing.

Guiding Principles of the Liuhebafa Lineage